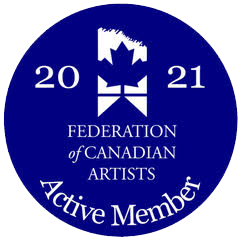 Born in rural Ontario, Burnette joined a flock of 12 siblings.
Raised on a small farm.She enjoyed a wild, free-range childhood full of fields and forests. With imagination leading the way and very little material possessions the 10 sisters and 3 brothers made memories, and grew their creative abilities daily.

Then, at the age of 13 Burnette crossed the path of a new boy in town. Ron Gilles entered her life with the full force of a freight train. Little did either of them know at the time that the chain of events leading up to the moment they met were only a precursor to a fantastic love story that was to span almost 50 years right up until present day.
Married at 18 and 21 years old, respectively, they began building a family. With the birth of their 2 children, a daughter and then a son, the young couple made a pivotal decision to head out west to British Columbia. With the promise of a job opportunity on Vancouver Island they sold what little they had and loaded their 2 toddlers into the car and made the 2 week adventure across Canada.

They learned hard life lessons quickly upon arriving on the west coast. They discovered that the job opportunity was a bust. Discouraged, they made the only decision that made sense, head back home to Ontario. However the universe had other plans for them. Only a day into their long drive their old car broke down in the small but picturesque town of Penticton. Ron walked into a local print shop that was advertising a job that needed filling. He announced that the job was meant for him and without waiting to hear the answer he asked them ‘when do I start?’ With that job began a residency lasting 9 years.

Burnette spent her days raising their 2 children and working a few local part time jobs. But eventually it became clear that the small family was outgrowing the small town and in an effort to give the opportunities available in the big city to their kids they packed up and headed to Vancouver. They settled into the mountains and marshes of Maple Ridge. With career changes, graduations, weddings, and 5 grandchildren Burnette’s life was full and content.

It wasn’t until she received a life altering diagnosis in 2017 that her strength, and limits would be tested. Interstitial Lung Disease. A terrifying placement high on the transplant list. It was the bomb that detonated the year she had finally decided to retire from her job. Her diagnosis threatened all that Burnette had hoped and planned for in her golden years. Devastated at first, she then made the decision to not let it destroy her spirit. Unable to even get through the day with out being hooked up to oxygen her daily life quickly changed dramatically. She found herself in pandemic style quarantine 3 years before the rest of the world even entered into the Covid 19 pandemic. Pushing through, and determined to stay positive, Burnette started walking everyday. With her oxygen tank strapped to her back she walked, an unbelievable 5 to 10 kilometres. Frustrated with her inability to travel and do most of the things she had always taken for granted, she began searching for something to fill her days. And that is when she began painting.

Her early works were full of potential. She found a hidden talent in acrylic painting and that fuelled her. She immersed herself into her art , painting images from the internet at first ,then she began using her husbands photography for reference photos .Sometimes she would put her own modernist spin on them and sometimes she would paint them as realist. She was finding her own artistic voice and in just 3 short years that voice has become loud and clear. While putting the people around her into a state of absolute amazement with her talent she was also busy amazing her medical team. From her rheumatologist to her transplant team they all declared Burnette exceptional as her body began to bounce back. She found she no longer needed the support of her oxygen and her breath tests were baffling her respirologist. Levelling down on the transplant list is not typical of someone with her diagnosis but here is where she found herself. She credits her positive thinking, long walks and her newfound love of art with pulling her from the depths of this disease. Now with her health in a more manageable state, and her continually growing artistic ability to keep her busy, seldom has anyone’s golden years shone so brightly.